It’s summer, and we all want washboard abs and muscles to go with our farmer tans. But have you ever felt like the girls in the barn are just out to ruin your summer workout plan? “Oh, you wanna work out?” says Bessie the milk cow, “Guess I’m going to have a baby JUST when you’re getting ready to leave. No abs for you, Farmer Ted!”
Well does the Cow Chronicler have a solution for you! Developed with the help of my personal trainer/not-so-little little brother, I have a work out plan that you can do at home on the farm!

We all complain about carrying the watermelon up the front stairs. Instead of whining, turn that hard-to-carry melon of goodness into an extra “oomf” during your squat routine! 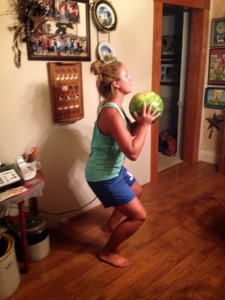 Those kittens are adorable until they won’t leave you the heck alone. Use these balls of fluff as an extra weight to push you even harder through that one push up. (Cause let’s be real, you’re not going to make it past one push up with cats on your back). Now do some bicep curls until one bites you. A calf has probably gotten loose somewhere on the farm at this point anyways.

Fighting with a sibling about who’s feeding calves tonight? Squat out the anger kids.

This move worked out for Karate Kid, didn’t it? 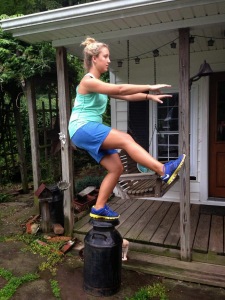 Wanna be the fastest wheel barrow driver in the 4H barn this year? Give this one a try… Just don’t throw your back out…. and watch out for those meddling kittens who like laughing at your struggle.

That bag of sawdust? Do a few lunges with it. Grunt like it weighs 50 pounds… people won’t think you’re as tough if they know how much it actually (doesn’t) weigh.

Nobody’s using the tractor? Good, because you and your workout partner are going to use it to get that to get that 6 pack that you can’t buy at the local beer distributor.

Do your show heifers need to lose a little weight too? You know what, do it together. It’s like the new version of halter breaking, except… not at all. 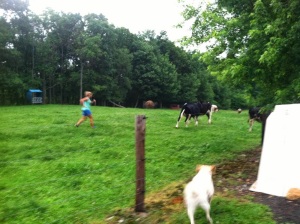 Now get up off that tractor and go get that farmer body you’ve been dreaming about!